Staffordshire Gliding Club occupies a section of what was RAF Seighford, an airfield that was built in 1943. It spent most of the war as a training airfield for heavy bombers, equipped for most of the time with the Wellington. Toward the end of the war it was also used as a storage and maintenance area for gliders. At wars end the airfield became disused until the Boulton Paul aircraft company leased the airfield. The company was based at a small airfield near Wolverhampton but needed a larger airfield from which to fly jet aircraft as they had won a contract to overhaul Canberras and Lightnings. As a result in the drawdown of military aircraft in the nineteen sixties, the contract was lost, with the land reverting to previous owners. The section now occupied by the club had its runways removed to provide hardcore in the 1960s. A section of the old main runway still exists to the south of the gliding area but is not part of the SGC operating area.

The club formed at the former RAF Meir in Stoke-on-Trent (now a retail park) from a group of ATC instructors in the early sixties. The club flourished at Meir but with the site being developed in 1972 was forced to move. The club found a location at Morridge, a hill site overlooking Leek. Although the club again flourished the site was not ideal so a new site was sought. The present site was found and a lease negotiated, with the club moving in 1992. The site allows the club to offer its members both aerotow and winch launches. The club operates Saturday, Sunday and Wednesday throughout the year. Flying on other days is done by prior arrangement and can occur frequently during the summer, usually solely by aerotow.

Airspace – we are quite lucky in that the airway above the site does not start until 5500ft (QNH). The only local Danger Area is the Swinnerton Range that is located 5 NM, North of the field, it is occasionally activated with an attendant NOTAM. Seighford lies within the RAF Shawbury Low Flying Area.

Seighford is not available to powered aircraft unless they are visiting the club on gliding business. PPR is required. There are four locations where we try to avoid overflying. These are the villages of Ranton, Ellenhall, Great Bridgeford and Seighford. Visiting pilots are requested to not fly over these villages if at all possible and certainly not whilst at full power. 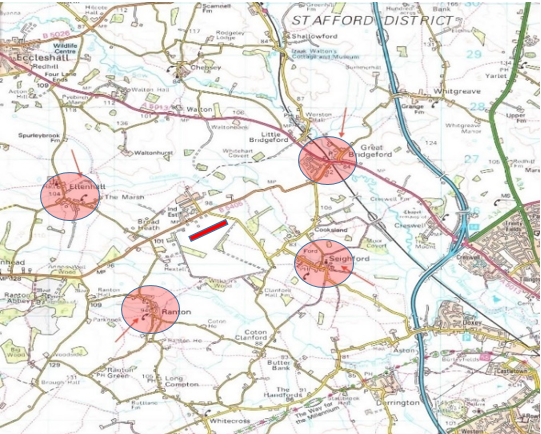 We have a single grass operating area orientated approximately 070/250. A tarmac runway immediately to the south of our strip is not part of our operation. Light aircraft sometimes operate from it but is usually in use by a driving experience company. The grass field is wide enough for us to utilise three strips. One on the north side, the middle (nominally for power and aerotow use) and the south. Which strip is used for launching and which for landing is nominated on a daily basis, during the morning briefing. This will also dictate the circuit direction. If intending to fly in, PPR is necessary. Please call first to obtain a briefing (on either the clubhouse 01785 282575 or launchpoint 07922 658314 only on operating days). A note left on the enquiries section of the website can also be made, if several days in advance, giving details and contacts

Prior reaching Seighford, call up on 129.980 for confirmation of field information. We do not usually make any circuit calls but do make a call just before joining the circuit. Caution that the field is quite bumpy and during winter months, suffers from waterlogging in areas. Parking is available in front of the clubhouse or by the side of the fencing in front of the hangar. Access to/from the airfield is via a gate that is locked outside operating hours. For pilots wishing to bring their own gliders, they will have to read and sign the Club Operating Notes prior to flying. A club checkout will be required in most cases.

Showing surrounding area and the tarmac strip to the south 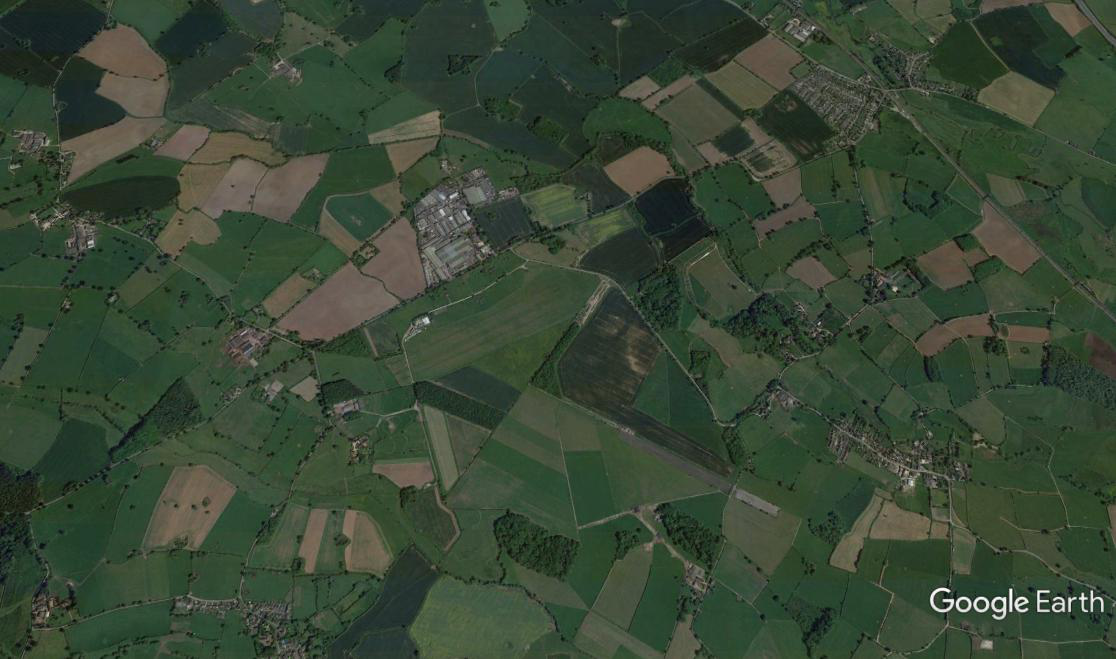 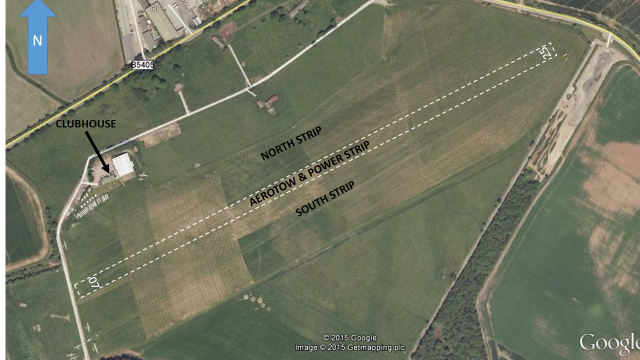 The power strip is approximately 850 metres.

Trees are in the under/overshoot in both directions

Please note that a landing fee will be collected before departure.